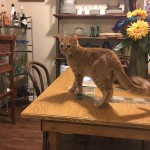 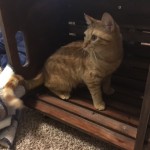 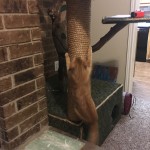 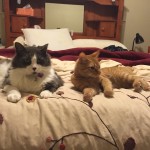 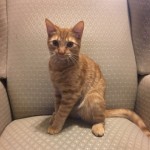 Sid, now Kvothe (after a stubborn red-headed male character in The Name of the Wind) is doing really well! As I said when we adopted him, we were looking for a cat with some fight in him to stand up to Fiyero, our 20-pound Maine Coon (named after a character in the book Wicked), and we got even more than we were hoping for! Kvothe is a rambunctious little guy, and we’ve found that periods of “time out” in a kennel are needed periodically when he refuses to stop doing certain things (like getting on the table—see photo). But he’s also provided my wife with the lap cat she’s always wanted—when he calms down, he’s the sweetest little thing! And he’s growing so fast!

He and Fiyero are still learning their way around one another. Fiyero is very much an only child; he’s never had to live indoors with another cat. A week ago, I would’ve said that we were concerned they would never get along. Kvothe is so used to playing and rough-housing with his siblings that he doesn’t realize that Fiyero doesn’t want to play and often jumps on Fiyero (a sight in and of itself given the size differential!), causing Fiyero to lose his temper and actually attack. To his credit, Kvothe never backs down, and before we can run over and separate them the little 6-pound Kvothe has Fiyero on his back or running away!

We are continuing with a slow integration process and over the last week things have slowly started to change. Kvothe has become marginally less eager to attack Fiyero at every turn, and Fiyero has taken to playing a little before he gets angry and starts fighting. So we’ve actually adopted a policy that when something breaks out we let them go at it until Fiyero starts growling (that’s the sign for him that he’s done playing). And sometimes the scuffle has ended before it even gets to that point, which means that Kvothe is learning when to stop. And Fiyero even occasionally licks him. So, we’re very happy about that progress!